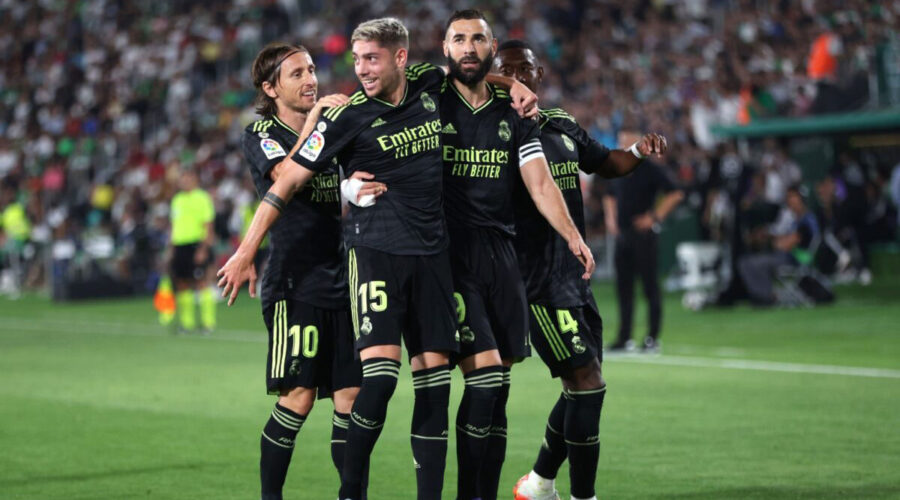 Real Madrid put up a show of their abilities against Elche as goals from Fede Valverde, Karim Benzema and Marco Asensio steered Los Blancos to grab the 3 points from Estadio Manuel Martinez Valero.

Here are the Real Madrid player ratings from the match:

Andriy Lunin — 8: Was sound in front of the goal. Made 3 crucial saves throughout the game. Good with his claims but most of the times left unthreatened by Elche.

Dani Carvajal —8: The Spaniard continues his stellar run from right-back. Combined well with Valverde and Rodrygo to unlock the Elche defence several times from the right. He could have been entitled an assist for the third goal which was ruled out for offside.

Eder Militao —8.5: A colossal presence in defence. Used his strength and stature correctly to neutralise any imminent threats from Elche attackers.

Antonio Rudiger —7: Got a cheap yellow card for creating an unnecessary disturbance inside the box during a corner at the end. His recovery has gone well and he showed that by winning aerial duels as well as helping the team build from the back.

David Alaba —8: Played in his natural position as a left-back and gave a considerable attacking edge to Real Madrid’s gameplay. Could have gotten his name on the score list but his goal was ruled out following an offside from Benzema who was involved in the gameplay.

Fede Valverde —8.5: The Uruguayan continues his goalscoring run as he scored the opener from a volley outside the box. His work-rate helped him cover ground both in the right and in midfield.

Luka Modric —7: Contributed to connecting passes and unlocking the opposition throughout his time during the game. Was subbed off in the 62nd minute.

Toni Kroos —7: Was involved in defensive gameplay most of the time and he fared well. Like always, synced well with everyone to give Elche a hard time.

Rodrygo —9: Another stupendous performance from the Brazilian who is improving day-by-day this season. Made two assists during the game — one was from Benzema’s goal in which he fed the ball to the Frenchman with a back heel and the second for Asensio’s goal as he threw in a precisive cross from the left.

Vinicius Jr —7: Gave Elche defenders a hard time with his menacing forward runs. Attracted a few fouls but couldn’t get himself involved in a goal after some wonderful displays.

Karim Benzema —8: Got two goals cancelled out for offside on the night by fine margins. Instead of getting disappointed, Benzema enjoyed the game with his exemplary passing and found the net after combining with Rodrygo. Ballon d’Or winner for a reason.

Aurelien Tchouameni —5: Since coming on from the bench, he kept the Elche attackers at bay. His passing game looked improved, just like the team.

Marco Asensio —7: Made an immediate impact after coming on by scoring a goal. Made a few attempts towards the end which ended in corners.

Lucas Vasquez and Nacho came on late and couldn’t make a significant impact on the game. 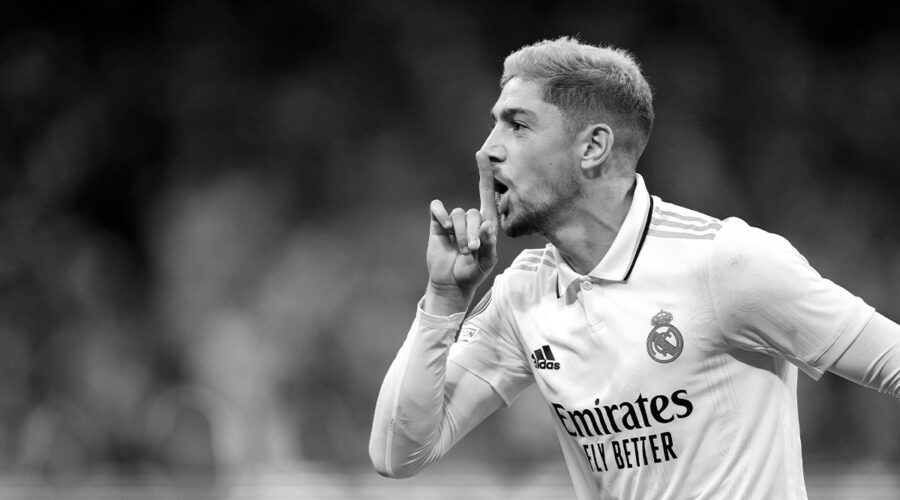 Rodrygo Goes and Fede Valverde were on the scoresheet as Real Madrid stretched their winning run to nine consecutive games since the start of the season by dismantling Atletico Madrid in the Madrid Derby.

Carlo Ancelotti named an unchanged lineup from Real Madrid’s UCL winning final against Liverpool. Los Blancos got a taste of some early season silverware as David Alaba and Karim Benzema were on point to give Real Madrid their 5th UEFA Super Cup. Here are my ratings from the game:

Thibaut Courtois(7/10): Made 3 crucial saves, one of which came early on in the game denying Daichi Kamada who could have started the scoring. Made a few claims settling the gameplay in Real Madrid’s favour

Ferland Mendy (7/10): Was nice and tight at the back with occasionally moving up the pitch. Attempted a few crosses which eventually found no one but accustomed well in distributing the ball from tight areas.

David Alaba (7.5/10): Scored the opener of the game by being present at the correct position at the right time. Was effective in defending and marking the likes of Kamada and N’dicka.

Eder Militão (7.5/10): Synced well with his defensive partner David Alaba. Was defensively sound and neutralised any imminent with ease apart from a few shaky moments in the early phase of the game.

Dani Carvajal (7/10): Went head-on with the Eintracht players and locked down his part of the flank well with Valverde. Won 2 of his attempted ground duels and was substituted off in the 85th minute.

Casemiro (8/10): Same as he plays round the year, he was a tank during the hours of this game. Kept the momentum going from the corner resulting in a goal and assisting Alaba. He neutralised any advances from the dangerous Kamada and his attacking compatriots. Tried a long-range shot but ultimately hit the woodwork.

Toni Kroos (7/10): Another usual day in the office for our German maestro who completed the most passes in the match (97). Had a pass success rate of 94% and dictated the tempo of the game. Found Benzema from a tight angle which could have been something by quickly accelerating and winning a lay ball. Substituted off in the 85th minute.

Luka Modric (6.5/10): Had a few shaky moments and also got dispossessed two times. Eintracht didn’t let him grow into the match further by tightly marking him. Not in his usual self, he was substituted off in the 65th minute making way for Rodrygo. Won 33% of his ground duels but ended his game with a 93% pass success rate.

Fede Valverde (7.5/10): It’s a myth that Valverde has only two lungs, he was literally present everywhere on the pitch, starting off as a RWB and then gradually locking down that entire wing. Made 6 recoveries and won 2 of his ground duels out of an attempted 4. Showed an exemplary display, cutting out opponent passing lanes and supporting the defence whenever Eintracht approached the final thirds of the pitch.

Vini Jr. (7.5/10): Missed a huge chance orchestrated by Benzema in the first half and got denied by a goal line clearance from Eintracht’s Tuta. Got dispossessed several times and was well covered by the opponent defenders. In the second half, he gradually brought himself into the game starting off with invoking a measured acceleration, ruining the Eintracht resistance and finding Benzema leading to the score getting 2-0. Was the most fouled player in the match (3), clearly showing the peril he causes to the opposition even when he doesn’t get everything right.

Karim Benzema (8.5/10): Helped in the link-up game from the midfield to the forward. Latched on Vini with a few incisive through balls tormenting the Eintracht defence. Scored from a powered yet calculated shot from a Vini pass from across the pitch and thus putting him up there on the scoresheet.

Rodrygo (5/10): Linked up well from the midfield acting as a ball carrier by latching himself onto a few through balls, brought pace to the game and won 3 of his attempted ground duels.

Eduardo Camavinga, Antonio Rudiger, Aurelien Tchouameni and Dani Ceballos are the players that came on late and couldn’t make a significant impact on the game.

Real Madrid edge past Liverpool in the UCL Final as they bring the 14th Champions League home. Let us take a look at how the Real Madrid player ratings after the historic night in Paris.