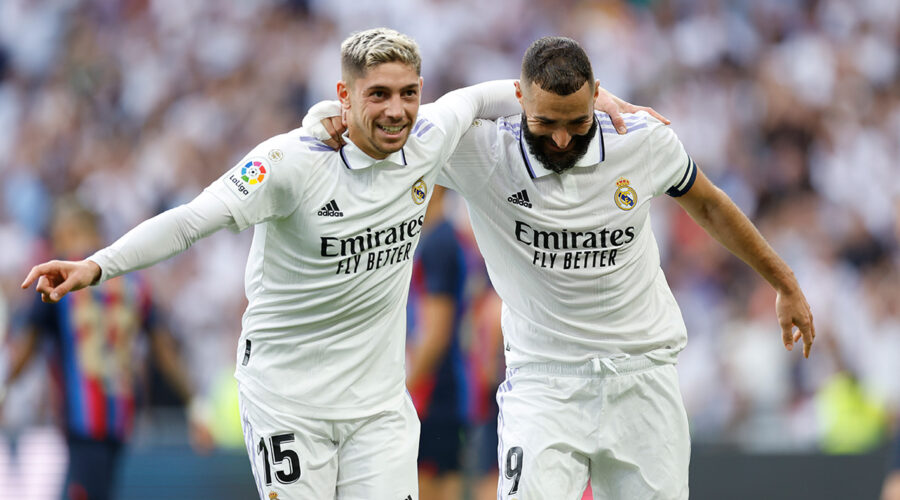 It was the hosts, Real Madrid who found success in this season’s first El Clasico and kept their unbeaten record intact in all competitions. Goals from Ballon D’Or favorite Karim Benzema, Fede Valverde and Rodrygo helped the hosts cruise through the derby while handing Barcelona their first defeat of the season in the league. With this win, Real Madrid have regained the top spot in the LaLiga standings and are now 3 points clear of their Catalan rivals who shifted to 2nd place after coming short at Madrid.

Real Madrid drew first blood in the game as talismanic forward Karim Benzema opened the scoring for Los Blancos in the 12th minute. Toni Kroos unleashed a wonderful through ball for Vinicius to chase who picked and set up a 1v1 situation with Ter Stegen, Vini’s shot was saved by the German goalkeeper but Karim Benzema was on point to smash the ball home from the rebound.

The 35-times LaLiga champions further strengthened their lead in the 35th minute with a tremendous out-of-the-box effort from Fede Valverde. Vini released Ferland Mendy who drove through an unsettled Barca defence and rounded the ball off to Valverde before the Uruguayan smashed it into the goal with a powerful long-range strike.

It was a cautious start for both the teams in the second half as the midfield battle was crucial for either team coming towards goal. A lack of urgency was also noted from the trailers, Barcelona who were clearly showing fatigue after their 3-3 draw with Inter in the Champions League.

It was the substitute Ferran Torres who showed a ray of hope to Blaugrana supporters after scoring Barca’s first from a well-worked move from the Catalan outfit. In spite of a challenge from Valverde on the right side, Ansu Fati drove through uncovered space in the final thirds before sending a low cross for Lewandowski, who flicked it on for Ferran Torres at the far post and the Spaniard thumped the ball home from close range past a diving Andriy Lunin.

The Bernabeu went a little shocked with fears of a Barca comeback on the cards but the hopes of the Blaugrana were shut after Eric Garcia stepped on Rodrygo’s foot inside the box for a clear penalty in the 90+1st minute. After a brief on-field review, referee Hernandez Hernandez pointed to the spot and 21-year-old Rodrygo kept his cool to send the ball in the right corner past a diving Ter Stegen.

Real Madrid next faces Elche at the Estadio Manuel Martinez Valero on Wednesday. 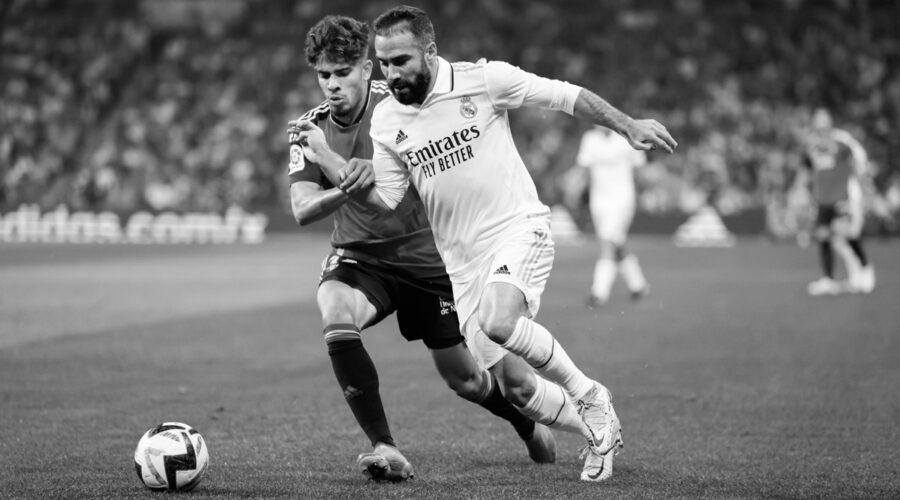 Real Madrid’s nine-game winning streak in all competitions came to an end after they played out a 1-1 draw with 10 men Osasuna.

It was a day of thrillers as Vinicius’ deceiving cross-like shot found the back of the net and Osasuna’s equaliser came in the form of a no-look header from Kike Garcia who was completely unaware of his header’s direction.

As Real Madrid shared points with the team from Pamplona on the day, they got toppled by Barcelona in the league standings who now occupy first place sending their Madrid rivals to second with points tied.

Here are my three observations from the match:

Weary from the International Break

Of course, Madridistas are gutted to see their team’s winning run falter but it was coming sooner or later. Hopefully, the players will be able to strike off their weariness and be truly back for the mid-week clash against Shakhtar.

It has been another match where Real Madrid failed to keep a clean sheet because of defensive instability. If Antonio Rudiger could predict the incoming cross from Unai Garcia for Kike, Real could have kept their long-awaited clean sheet, such latency to foresee an attacking ball from the opponent will no doubt cost Ancelotti’s men many during the season.

There are more problems existing in the defence and Ancelotti might need to sort them out soon with El Clasico approaching this month.

This defeat doesn’t make the season

Let’s be clear on one thing. Yes, Real Madrid started the season on a high after composing a nine-game win streak but certainly, Madridistas perhaps didn’t expect an ‘invincible’ season from their club.

Optimistically speaking, this defeat was coming sooner or later and it happened early enough to give the team time to compose and restructure themselves. 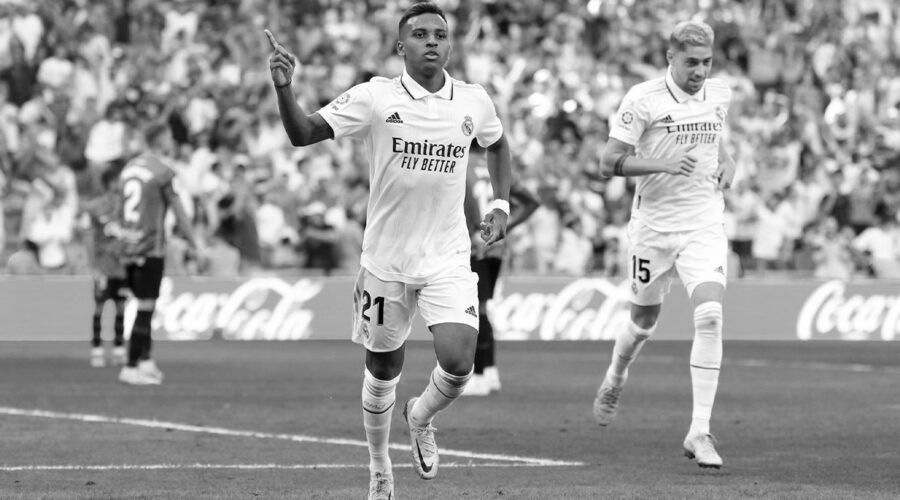 Real Madrid continued their perfect start to the 2022/23 season after running riot against 13th placed Mallorca on Sunday in Matchday 5 of La Liga.

The current league and UCL champions were under pressure from Barcelona’s last night’s victory against lowly Cadiz and Karim Benzema’s absence from the squad for today. Despite getting 1-0 down in the first half, Ancelotti’s men packed a massive punch as they soared through Mallorca scoring incisively to make it a 4-1 rout.

Real dominated possession for most parts of the first half but were not clinical in their efforts which they later compensated for by conceding from an in-form Vedat Muriqi. Being unmarked, Muriqi rose above everyone defending and attacking a set-piece from Kang Lee before heading home his third goal in four matches.

Mallorca went a bit into their shell after scoring employing the tactic of ‘park the bus’ and allowed Real Madrid the ball with the chances.

It was not long before Los Blancos found the equaliser from a sensational goal from Fede Valverde in added time of the first half. The Uruguayan drove through with a phenomenal run after picking a pass from Dani Ceballos in his own half, covering most of the field and popping in an outrageous goal from just outside the box. Some may claim it to be a contender for the ‘Goal of the Season.’

A nervy came along for the home side in the 65th minute as Mallorca’s Clement Grenier dribbled exquisitely past Rudiger and Alaba, setting up an open scoring chance for Antonio Sanchez who pulled his shot wide.

Mallorca tried to hold a compact defence as they were content with a point but a moment of magic from Real’s starting Brazilian duo did the job in providing Los Blancos the lead for the first time during the afternoon. Rodrygo drove through the Mallorca defenders before passing the ball to Vini near the goal and the latter kept his cool and delicately shot the ball past the opposing goalkeeper Rajkovic.

From here on, it was all Real Madrid as they were the ones creating the chances and taking them. Real made it 3-1 in the 89th minute as Rodrygo dribbled past a weary Mallorca defence before sending the ball into the net and it was as easy as it was.

The insurance goal couldn’t quench Real’s hunger as they came haunting again from a Toni Kroos free-kick. New signing Antonio Rudiger got his first goal for the club as he thumped home the final one for Real Madrid just before the referee signalled the final whistle. 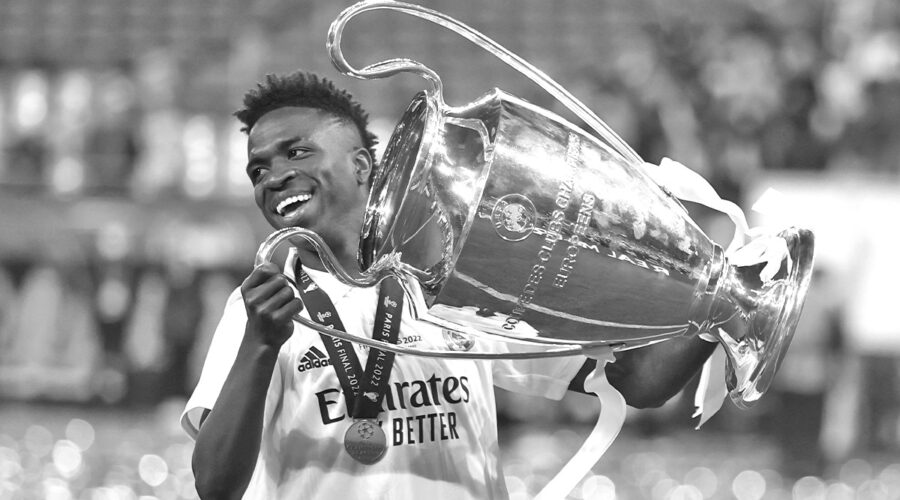 Real Madrid edge past Liverpool in the UCL Final as they bring the 14th Champions League home. Let us take a look at how the Real Madrid player ratings after the historic night in Paris. 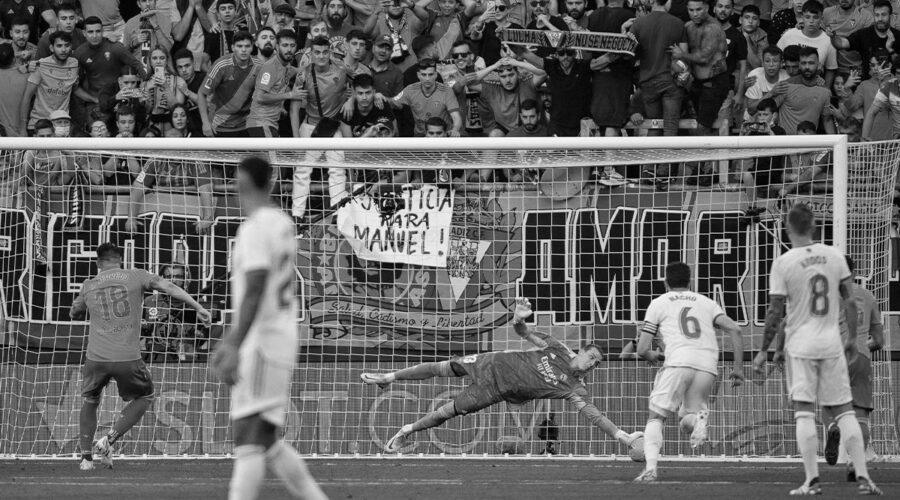 Real Madrid and Cadiz share points in an intense match

It ended in a stalemate at the Nuevo Mirandilla as both Real Madrid and Cadiz remained unseparated in a passionate 1-1 draw. Relegation contenders Cadiz needed three points from this match to maintain their fate in their own hands on the final matchday but failed to do so. 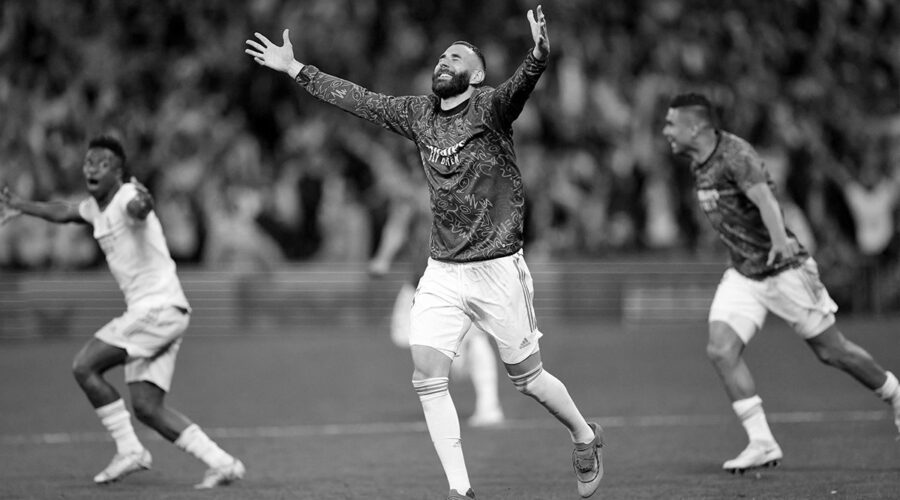 Reliving a magical night as Real Madrid pulls off the impossible!

Real Madrid once again pulled off what seemed impossible. Los Blancos scored 2 goals in 2 minutes i.e. in the 90th and 91st minute respectively to take Manchester City to extra time. Karim Benzema sent The Citizens home with a winner from the spot in extra time. 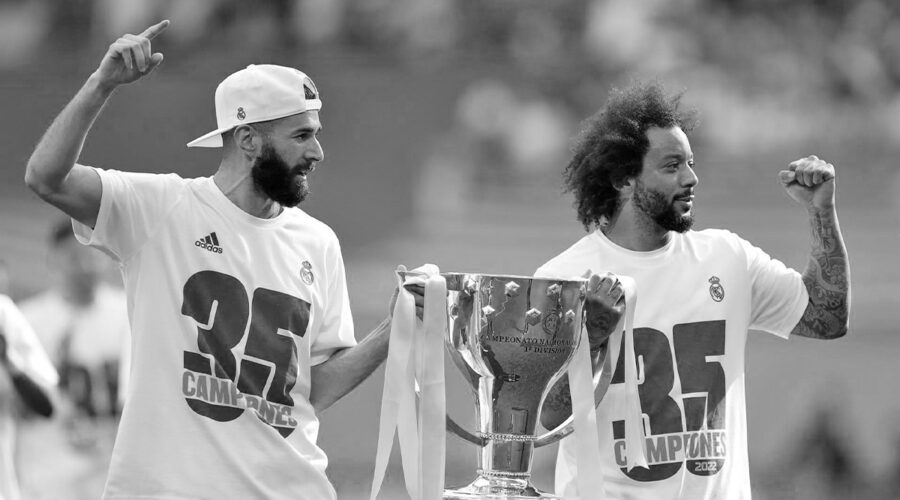 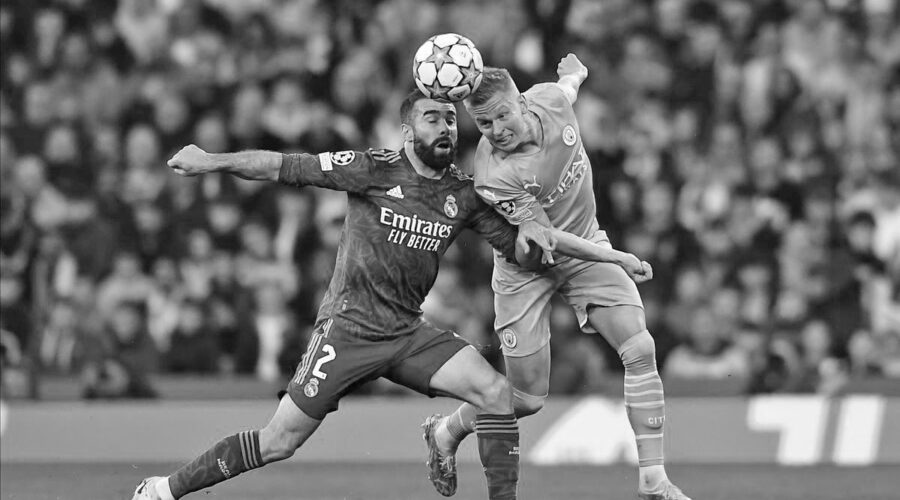 Manchester City threw all their firepower at Real Madrid in a 4-3 win at the Etihad Stadium, but the Los Blancos stuck to their own script in refusing to give up. 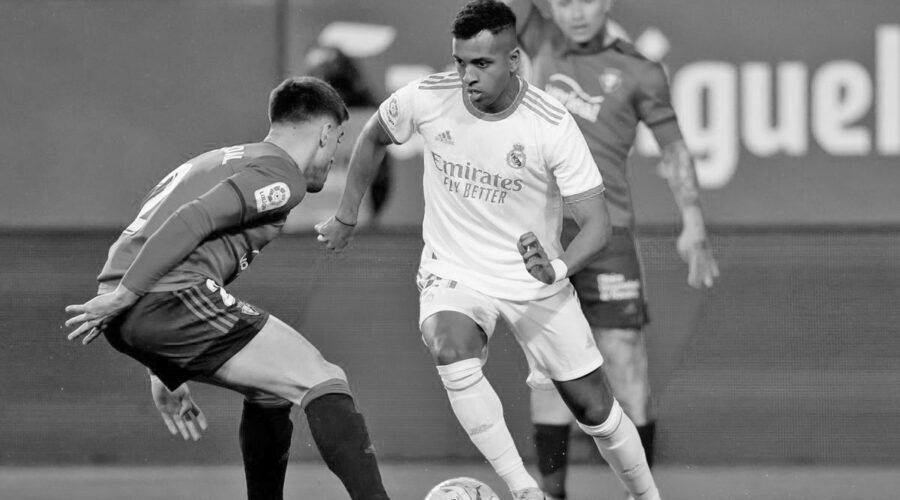 Real Madrid continues their quest for the La Liga title after disposing of Osasuna in Pamplona on Wednesday.

We take a look at how our players fared against Osasuna. 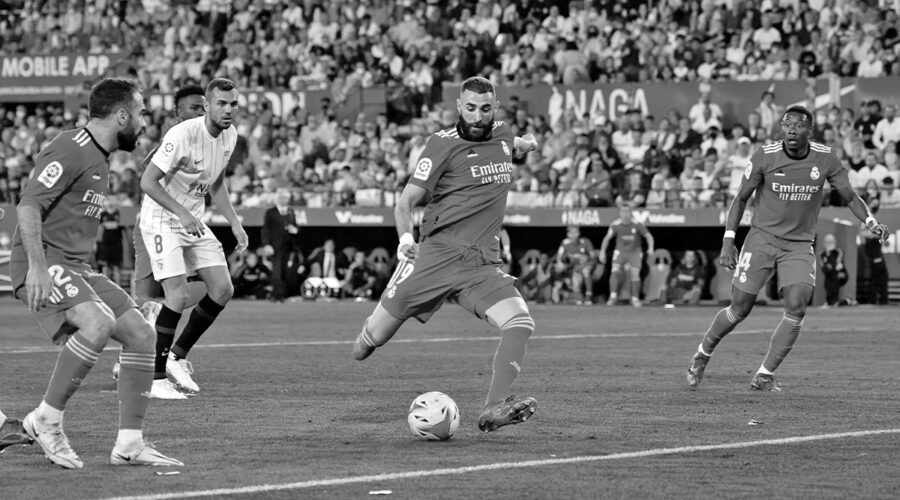 Real Madrid made yet another epic comeback against second-placed Sevilla at the Sanchez Pizjuan on Sunday. After the entertaining match, it is now of utmost certainty that the Laliga title will be travelling to the Santiago Bernabeu.